The assessment data in the table is based on the method Ralph developed at Cornell and which is described in this article in the Journal of Chemical Health and Safety.

Questions about this information should be directed to Ralph Stuart at ralph.stuart@keene.edu

What is the direction of the air flow in Chemistry lab?

3 different directions (original test only did one)

What is the decay rate for Co2 when entire room is filled?

-Release 4 5 pound extinguishers right next to the fume hoods

-One duct is different from the others, it has a motor inside that may change the pressure inside the duct

-Determine wether or not pressure within duct is negative therefore interfering with he flow rate.

Measure pressure from the hallway and the room.

-Measure pressure at doorway of the lab using EXTECH monitor.

Measure PPM of acetic acid in classroom during lab testing.

A class is conducting the same acidic acid experiment and this time we will be there with acidic acid tube testing, sampling different area within the room finding the PPM during the experiment.

Today on February 6th was our second work day. During this work period we checked back in Rhodes Hall to make sure the 4 faculty rooms were drying up. We went and spoke to the science professor recovering more information needed about the experiment taken place a few months ago, and spent some more time on the roof learning about the ventilation system. Our main goal is to try and understand why the odor from one lab experiment was getting into the 3 other lab rooms along with faculty rooms. Lastly we recovered some of the blueprint for the TDS duct system which was also very beneficial in terms of being able to understand why we are having such a big problem.

When looking at the blueprint for the ducts we were able to spot a possible problem. The exhaust for the hoods of the science labs may be too close to the air resupply. Basically some of the fumes that are meant to be shot up and far away from the building are essentially just being recirculated through the building causing problems for the science professor and everybody else in the building

My hypothesis about this project, and what is seems like I can tell all-ready is that the ventilation system we currently have in the TDS building is not capable of ventilating any dangerous fumes. If our science department wanted to do an experiment with some dangerous gases or acids then it could be extremely dangerous for everyone else in the building. My goal is to try and come up with h cheapest possible solution for the ventilation system for improve. 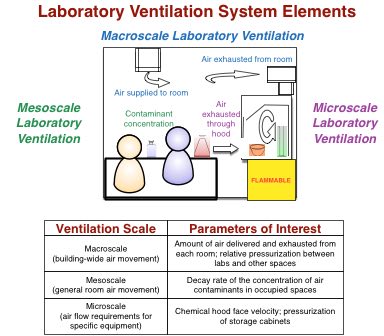